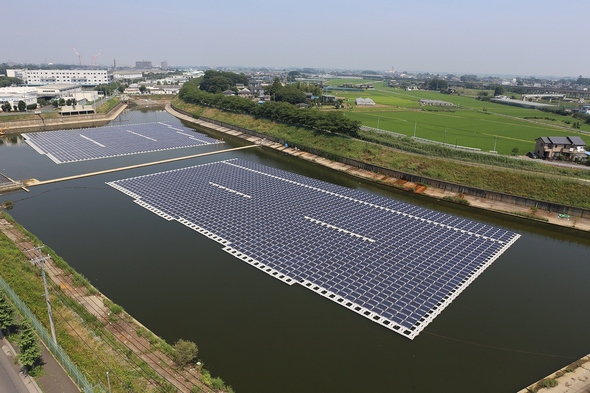 Approximately 4,500 solar panels are floating on a surface area of about 12,400m2 of the 30,000m2 reservoir, which was built to adjust the amount of water in nearby rivers. From fall to winter, various kinds of birds including migrating birds and waterfowl rest on the floating mounts of the solar panels .

The method that floats solar panels on the lake and reservoir has a lot of benefits. It gives the lake/reservoir owner the opportunity to earn rent and business tax, which could not be imagined before. For power plant operators, on the other hand, it allows them to rent the property cheaply with no land reclamation cost and relatively lower costs for weeding and other maintenance and management.

Furthermore, even if the panels used are crystal silicon solar ones whose power generation efficiency tends to decrease due to high temperatures in summer, the floating method keeps their temperature from rising and enables the system to more easily secure the required amount of power generation than the on-land method, thanks to the cooling effect produced by the water surface. However, considering the large cost for installation, the issue is how to absorb the rise in cost and secure profitability at the same time.

Solar-on-the-Water Okegawa’s maximum output is approximately 1.2MW, which is “probably the largest for on-water solar power plants in the world,” said Executive Director Toshihisa Nagashima of West Holdings Corp. The plant started power generation in July 2013 with an expected power generation capacity of about 1.25 million kW per year, which corresponds to the amount of electricity used by roughly 400 4-people families.

The owner of the reservoir is Okegawa City, while the West Holdings Group constructed the plant and became its operator. As such, Okegawa City succeeded in meeting its goal to effectively use its asset, a balancing reservoir, following the construction of the power plant.

Okegawa City will earn ¥1,859,000 (approx US$18,555) per year in rent from the water surface for the next 20 years. It is paid by Japan Mega Solar Power Co (Shibuya Ward, Tokyo), which is affiliated with West Holdings (the operator of the power generation business). Previously, the reservoir was only used for water storage, costing the city in terms of maintenance/management, and being left unused except for times of emergency. Hence, it is a great benefit for the city to start earning income from the reservoir.

This reservoir was built primarily as a measure against flooding of the many rivers in this area such as the Naka and Ayase rivers and their side streams. It prevents flooding by pooling some of the river water that has increased due to torrential rain. There are many reservoirs for the same purpose scattered in the plain spreading across the eastern part of Saitama Prefecture including Okegawa City.

Set up on municipal property, the power generation facility features, upon request by Okegawa City, a stand-alone operation capability and removable secondary batteries. This is for the purpose of using the batteries as regional emergency power supplies during times of emergency and blackouts. A 250kW-output PV inverter was introduced for these emergency power supplies in addition to the 500kW model to generate power for sale under usual conditions. Both are products manufactured by Toshiba Mitsubishi-Electric Industrial Systems Corp (TMEIC).

Created by Sheismartha Studios // What is Pixel Art ? People usually ask the same question when they see Pixel Art for the first…